Not too many years ago, if you wanted to build a deck on your roof you could just lay down a few wood bearers (taking care not to damage any waterproof membrane of course) and then nail or screw wood planks of a species which took your fancy over the top.  But then fire regulations began to get tougher. The first thing to change was that you couldn’t just use any wood species; you had to use a material that was classified as Class A by the NFPA.   Ipe wood just squeaked in with this rating and thus became the most common decking material used on rooftop decks.

But then even Class A rated wood decking materials could not be used over the entire deck but could be only used over a certain percentage. The rest of the deck surface had to be a completely non-combustible material.

And then in some locations, even that was not enough. Any material used on a rooftop deck had to be fire resistant and the deck and any support materials had to pass the ASTM E-84 spread of flame test. However, under this test, you could generally still use standard plastic support pedestals to support pavers. So you could construct the deck with not only porcelain or concrete pavers, but you could still use 24” x 24” structural Ipe wood deck tiles supported by the plastic pedestals.

Then things got even tougher in some places where concerns about the flammability of plastic material were being expressed. So manufacturers like Eterno developed a range of pedestals containing special fire-retardant materials. But this was really only a partial solution as the pedestals could only be classified as self-extinguishing and not actually fireproof.  The components added to the plastic resin generally also had properties that reduced the smoke generated when the pedestals caught fire. But unfortunately, these pedestals could not be strictly classified as fire-resistant, because plastic is nevertheless a combustible material.

The solution to this problem was the all steel pedestal which uses a screwed steel column instead of the wide screwed plastic columns which had been the de facto material for paver supports for many years. So these pedestals can now be classified as totally non-combustible decking materials. These achieve a European Classification (Euroclass) A1 Fire Rating – the highest fire rating achievable in Europe. 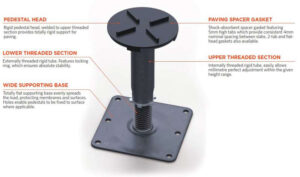 w as 1” to a max. of 20”, with continuously variable height adjustment through the entire range. The square 6 ¼” x 6 ¼” steel base plate spreads the load evenly over the substrate, but a 9” x 9” buffer pad can be used under the pedestal if preferred.

This non-combustible pedestal range is now available from our MD warehouse in the full range from 1” to 20”. And although these pedestals are manufactured from solid steel with an anti-corrosion coating, their price is still comparable with similar plastic pedestals.

One of the main differences between plastic pedestals and  steel pedestals, apart from their superior loading capacity much longer life and warranty, is that the steel range uses eight separate models to cover the range from 1” to 20” while a plastic pedestal system will typically use up to six different models plus add-in extension elements to build up the height.

So when constructing elevated decks on rooftops which require totally non-combustible decking materials to be used, there’s now a solution – all steel pedestals from Archatrak.