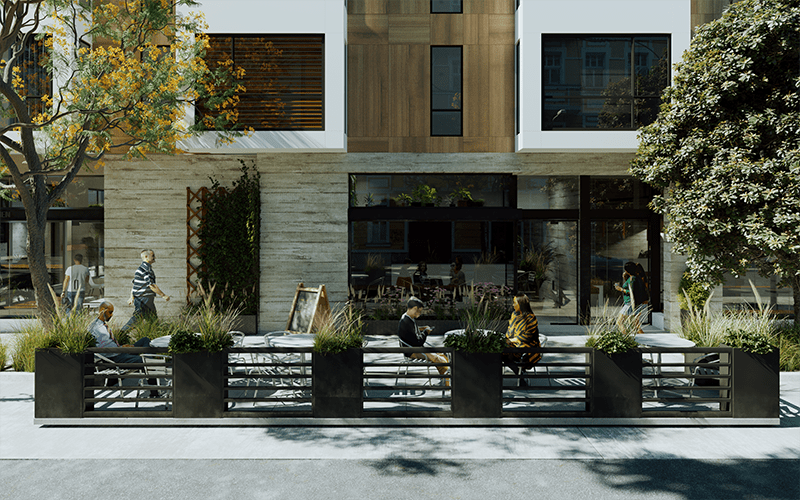 Despite restrictions on restaurant opening being eased in many locations, even where restaurants have been open for over three weeks, reported bookings are still down more than 70% in many locations, prompting people like Steve Hafner, chief executive of OpenTable, a restaurant-reservation website, to warn that as many as a quarter of restaurants in the country will never open their doors again, as reported in a recent article in The Economist. Can outdoor dining and street seating help save many restaurants?

With social distancing becoming such an important factor in people’s lives, there remains a natural reluctance for diners to gather inside many restaurants, despite the requirement for a limited number of patrons inside at all times and a specified distance between tables. And although the hope of a vaccine at some point in the next 12 months will undoubtedly change behavior, there’s a growing belief that the pandemic’s effect on people’s behavior may be more damaging and longer lasting than many had thought. It’s an unfortunate certainty that a very large number of restaurants will not be able to survive until a safe and satisfactory vaccine is created and made available in sufficient quantities for everyone.

Street Dining on Closed Off Roadways

A partial solution to the problems of restaurants, at least during the warmer months of the year and also where restaurants are congregated in shopping strips or downtown areas with significant pedestrian traffic, maybe to increase opportunities for outdoor dining with street seating set up on closed off roadways. Of course in many locations this is already quite popular, but in other locations, councils often have very strict regulations that restrict activities on pavements. It’s clear that authorities in these locations really need to consider not only relaxing such regulations in these difficult times, but speeding up the process of approvals.

Another consequence of the Covid 19 situation has been the decrease in vehicular traffic in the center of cities, leading many cities to seriously consider reducing the emphasis on cars and making more room for people to walk and cycle as cited in this article.  It has also highlighted the disproportionate amount of street space dedicated to cars, while footpaths are often disproportionately narrow, and especially so under current social distancing guidelines.
In New York there are plans to shut off up to 100 miles of streets from traffic to enable residents more room to spread out.

But widening footpaths is not something that can be accomplished overnight. A better solution, at least until more permanent changes could be made to pavements, can be to use existing car parking spaces to install self-contained seating areas or Parklets.  These small seating areas are becoming increasingly common in cities around the world, providing a convenience place for people to meet, relax, read a book, work on a laptop, enjoy a coffee, all in the open air, rather than confined inside a shop or restaurant. And with the decrease in vehicular traffic through the center of many cities, one would hope that the relevant authorities would be much more amenable to closing off parking spaces for use by such parklets. And especially that they could act much more quickly in approving such facilities, which can often take over six months.

Typically these Parklets have been initiated by a local trader’s association or a group of citizens and not by specific retail establishments. In fact, typically the regulations for establishing a Parklet prohibit a specific shop from making a Parklet exclusively available to their patrons. Maybe such rules will need to become more flexible in the future, although under current circumstances, it’s likely that a restaurant already facing financial difficulties may have difficulty in financing the installation of a parklet as an individual entity.

A major advantage of installing a seating area like a Parklet in a street parking spot is that it doesn’t diminish the width of the existing payment, so pedestrians can still practice appropriate social distancing. Also, a street Parklet can in reality be as long as anyone wants, although typically such Parklets occupy the length of a single or double car space. After accounting for necessary protection barriers/buffer, that means the available space on a Parklet deck is either 6’ x 12’ for a single car space or 6’ x 32’ for double car space. Obviously, taking into account social distancing guidelines, a Parklet in a double car space not only has much more utility, but is also more cost-effective.

‘StreetDeck’ modular decks supplied by Archatrak can be a very effective means of creating such street seating quickly and easily.  Our self-contained modular decks can be supplied complete with fully integrated railings and planters, ready for installation in any street location, offering a totally self-contained area where appropriately spaced seating and tables can be positioned. You could also install partitions to provide further isolation for diners and you could also mount sanitation stations for use by restaurant staff and patrons.

But ‘StreetDeck’ modules are not just useful for installation on roadways. Where pavements are sufficiently wide, or streets have been permanently blocked to vehicular traffic, you can use them to easily create self-contained, dining areas outside a restaurant. Their modular design allows you to build a deck in any dimension in increments of 24” either in length or width, and the adjustable height pedestals used for support means you will have a perfectly level deck over any hard surface, irrespective of the slope of the pavement or street.

Our ‘StreetDeck’ modular decks are typically much more affordable than custom made solutions, especially when architects fees, transport and installation costs are taken into account. A one-car ‘StreetDeck’ complete with planters, railings and porcelain paver decking will normally cost less than $12,000 while a two-car deck will normally cost less than $20,000, depending on the configuration. These decks just need to be bolted together, with no special equipment or labor required, and no cutting or fabrication on-site. And because of the modular design, if they are required on a temporary basis, you can pack them away for use at another time.

Although we offer a ready made kit with all planters and railings, we also supply a kit with just the deck, pedestals and perimeter frame. So effectively you have infinite customization possibilities with planters, railings and seating, not forgetting 50+ color/style options for the porcelain deck surface.

And we now supply a range of solar seating including benches with solar panels on top which offer the convenience of phone charging ports plus ambient lighting, to add a touch more class to the outdoor dining experience.

Furthermore, in locations where entire streets are being shut off from traffic, you can use just the basic deck to provide an attractive area for street seating, where integrated planters and railings may not be necessary.

In any case, as either a temporary or permanent addition to a city streetscape, or just a simple but attractive platform for outdoor street restaurant dining, ‘StreetDeck’ modular decks can be one possible solution to assist the survival of small restaurants in downtown shopping strips.